The 10 Most Widespread Malicious Programs for 2002. 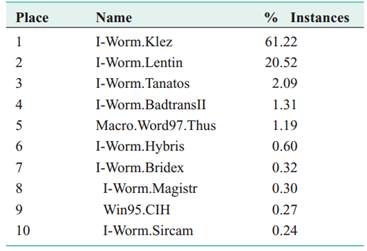 Suppose that 20 malicious software instances are reported. Assume that the malicious sources can be assumed to be independent.

(a) What is the probability at least one instance is “Klez”?

(b) What is the probability that three or more instances are “Klez”?

(c) What is the mean and standard deviation of the number of “Klez” instances among the 20 reported?

Heart failure is due to either natural occurrences (87%) or outside factors (13%). Outside... 1 answer below »

Traffic engineers install 10 streetlights with new bulbs. The probability that a bulb fails... 1 answer below »

During a sale, a boy bought six pairs of jeans, each with leg length x cm. He also bought four pairs